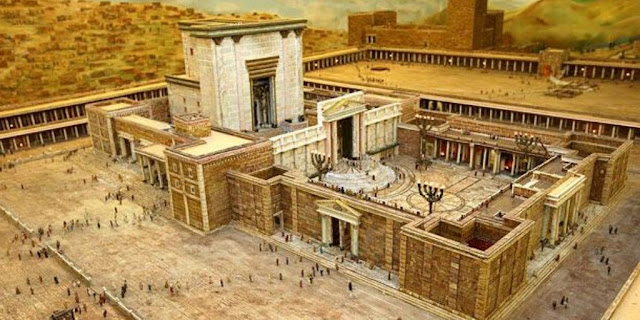 When Jesus went to Jerusalem much of what we have recorded especially in the book of John & the last week before Jesus' crucifixion in the synoptic Gospels  revolves around the temple complex.  Since we are so far removed from the history of Jerusalem we have no idea how magnificent this temple was.  Herod's temple was one one the most amazing engineering feats of the ancient world.  Check out this video of Herod's temple are meditate upon these words of our Lord....


Then they brought it [donkey] to Jesus, and after throwing their robes on the donkey, they helped Jesus get on it. 36 As He was going along, they were spreading their robes on the road. 37 Now He came near the path down the Mount of Olives, and the whole crowd of the disciples began to praise God joyfully with a loud voice for all the miracles they had seen: 38 Blessed is the King who comes in the name of the Lord. Peace in heaven and glory in the highest heaven! 39 Some of the Pharisees from the crowd told Him, "Teacher, rebuke Your disciples." 40 He answered, "I tell you, if they were to keep silent, the stones would cry out!"As He approached and saw the city, He wept [loud wailing lamentation] over it, 42 saying, "If you knew this day what [would bring] peace-but now it is hidden from your eyes. 43 For the days will come on you when your enemies will build an embankment against you, surround you, and hem you in on every side.44 They will crush you and your children within you to the ground, and they will not leave one stone on another in you, because you did not recognize the time of your visitation." 45 He went into the temple complex and began to throw out those who were selling, 46 and He said, "It is written, My house will be a house of prayer, but you have made it a den of thieves !" 47Every day He was teaching in the temple complex. The chief priests, the scribes, and the leaders of the people were looking for a way to destroy Him, 48 but they could not find a way to do it, because all the people were captivated by what they heard.  Luke 19:28-48

As He was going out of the temple complex, one of His disciples said to Him, "Teacher, look! What massive stones! What impressive buildings!" 2 Jesus said to him, "Do you see these great buildings? Not one stone will be left here on another that will not be thrown down!" Mark 13:1-2


My Meditation: Luke   - What a scene my Lord. Such tragedy, such victory, such humility, and love do I see in you my King. I can’t help but be excited for you as you are being praised for your mighty deeds, the crowds stirred with zeal a fresh by your miraculous miracle of raising lazarus from the dead. However, its seems that they are rejoicing in your power, rejoicing in your identity but it seems that they are disconnected from your heart. The true worshiper worships in spirit and truth, they were maybe connecting to some of the truths of who you were.... they were praising you as king and messiah, the one who comes in the name of the Lord. But they were not connected to your heart, what your spirit was feeling. What did you desire in that moment Jesus? Did it bring joy to your heart to hear them give you praise after being so rejected for so long in Judea? But is seems that your heart was somewhere so different than listening to the rejoicing multitudes. I can’t help but think that you were wanting friends who would empathize and weep with you over the city. Did anyone weep with you that day? or were your tears shed in lonely isolation. Jesus you didn’t hold back your emotion from those that thought so high of you. You became so vulnerable on that day, and how your emotion would have caused such confusion in your followers. What was it like for the multitude who thought that you would immediately take your throne to watch you weeping and lamenting. What was it like to watch God in the flesh wail and cry from the depth of His soul? Jesus I hate the accusations against you that say you are stoic and distant and don’t care. How can we think that you are not an emotional God? I must look upon you in this scene and see you weeping over me in the midst of my own hard heartedness. Oh how your tears melt our cold hearts. The God that administers judgment wails and weeps over his decision to execute wrath. Oh how fiercely committed to producing love you are! Even when it takes extreme measures to produce. You don’t enjoy the death of the wicked and you take no pleasure killing those you created for relationship but you will slay to remove what hinders love. Jesus as you weep, you can see the day of the gladness of your heart when you will be welcomed into this city, but even your divine foreknowledge cannot shield your heart from the real pain that you feel towards your beloved Jerusalem. Jesus the contrast again is seen, a vast multitude praising you, coming into a city of blood, a city that kills the prophets, a city that rejected you. But I can’t help but see you vindicating the immature praises of your followers. The pharisees yet again rise up against you, telling the uncreated God to stop receiving praise. The creature looks up at the creator and says "stop being worshiped." What did this evoke in your heart, knowing that for thousands of years you had been incessantly and continuously worshiped night and day from the very inception of creation. I cant help but think that you enjoyed telling that pharisee that if they stop....even the rocks will cry out. In other words. "My glory demands praise!"  Oh how much more you could have said, your meekness is astounding! Why do you restrain yourself constantly against the wicked? Why are you so patient with them? Why are you so patient with me? Jesus You ride in on a donkey, a animal used for plowing fields, for carrying heavy loads. No donkey will ever carry a load that heavy and that precious ever again. The burden of the beast that day was the weight of the divine burden against sin weighing upon you evoking lamentation. I cannot help but think of the communion between you and the Father that day... what did the Father speak to you that day. I think you were re-assured of your inheritance as you wept, but still the grief is real. The donkey carries and intercessor that day with a load no man has ever since carried. However, your intercession doesn’t turn back impending judgment, instead you decree judgement upon the city you love....this is the dichotomy that evokes your tears. However, there is a day soon coming when you will ride into this same city on a white steed splitting that same mountain that you are covering with your tears. The day of gladness in your heart is coming Jesus when you will kill your enemies and claim your bride and have your city. You will lament no more for you will receive the reward of your suffering and you will hear the praises of that city again, but next time a mature bride from every tribe tongue people and nation will cry out with the rocks as well as all of creation as she is liberated from the bondage of sin.
gospel meditations Historic Context of the New Testament Videos