The Deafening Silence of Jesus before Herod Antipas 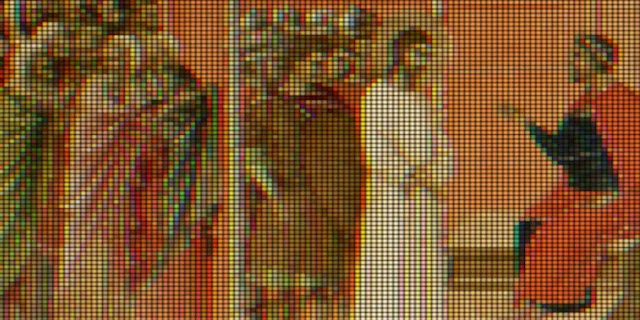 When Pilate heard this, he asked if the man was a Galilean. 7 Finding that He was under Herod's jurisdiction, he sent Him to Herod, who was also in Jerusalem during those days. 8 Herod was very glad to see Jesus; for a long time he had wanted to see Him, because he had heard about Him and was hoping to see some miracle performed by Him. 9 So he kept asking Him questions, but Jesus did not answer him. 10 The chief priests and the scribes stood by, vehemently accusing Him. 11 Then Herod, with his soldiers, treated Him with contempt, mocked Him, dressed Him in a brilliant robe, and sent Him back to Pilate. 12 That very day Herod and Pilate became friends. Previously, they had been hostile toward each other. Luke 23:6-12

Jesus what was it like for you as you stood before Herod Antipas?  I find it so duplicitous that this wicked man who killed your cousin would desire to see You?  But in fact we see as far back as the mount of transfiguration that Herod was desiring to see You.  He was exceedingly glad to see You?!? Why?  It seems that he was just wanting to be entertained, even the wicked desire to see miracles.  However, there was no pure motive in him.  Herod wanted to have an experience, but even if you would have performed a miracle before Him there would have been no repentance found in his heart.  Oh I pray that we the church never want to see miracles in this same spirit. Jesus your silence before this man is shouting that you have no relationship with the insincere.  The pharisees called the tax collectors and prostitutes sinners..... but here stands a true sinner and your silence is deafening.  There is no conversation given to Herod with God incarnate; his ears receive no revelation, no truth.  Does this show that there was something within Pilate you saw different?  You conversed with Pilate, but with this man nothing, not a word, not a phrase.  Your words are always an appeal to repent and come to the knowledge of the truth, but with Herod you knew his heart perfectly, and you saw no room for repentance in him.
Jesus what was the look on your face?  Did you even look at Herod? Even if you didn't the sheer magnitude of  your presence should have been enough to cause a trembling.  Though you had emptied your outward form of glory, you were still the fullness of God dwelling bodily!  Just your presence caused the demons to be terrified, tremble and fall before You, but what can we say that it did to Herod?  Oh, how dull and undiscerning Herod is in this scene to! But can I say that I would have discerned any different in that moment? For I too once treated You just like any other person.  The terror of sin is that it hardens the human heart to the point of being totally undiscerning of truth even when it is standing before ones own face. Herod can you not even a little perceive who it is that is standing before you right now?

The chief priests and scribes stand next to You and vehemently accuse you.  From one comes probing questions of despicable intent and they as well evoke no response.  From the others comes heinous  accusations attacking Your character, Your integrity, Your motives and again You stand silent. Here man stands reviling God.  Finally, the veil comes off and what is truly in the heart of the sons of Adam is seen. My voice too was once heard with this sharp accusation; for I once fully participated in this mockery.  Jesus....You had already appealed time and time again to these chief priests and scribes.  They had time and time again resisted You because of envy.  Your appeals had fallen upon deaf ears and Your words only solidified what was already in their hearts...... just as it did to Pharaoh.

Jesus how terrifying Your words can be.  To some beckoning the heart to love and repentance, to some it only causes their own hardness and sin to be solidified.  But we can be sure of this.... Your presence and your word will evoke a response.  To some your presence is a glorious shower of blessing to some the most terrible judgement.

After your silence we move into the most horrid part of this scene.... we see Herod and the soldiers treating you with contempt.  Contempt to: destain; to treat as vile or worthless.  Jesus I want to scream right now!!!  Such hatred is stirring in my heart towards your adversaries.  Stop talking to Him like that!!!!  Jesus my zeal is stirred like that of Peter’s who cut off the ear of your adversary.  However, what was your response?  You rebuked Him and told him to put his sword away! My anger seems just but you would say to me what you said to Peter who was trying to keep you from you sufferings.  "Get behind Me Satan, for you mindful of the things of man not the things of God".  And so like Peter I stand helpless having to watch Herod revile you also being reminded that the only man worthy to execute judgement is the one who has no sin....and I am guilty of participating in Herod's sin.   If He is to be condemned so should I be.

Jesus what was happening in your heart in this moment when the questions turn to mocking and reviling?  They put a robe on you?  They mock your royalty!?!?!  How can you stay silent!!  Oh, King of Kings  I can’t help but think of your true robe that filled the temple in Isaiah 6.  Your robe filled up the heavenly temple and caused all of the heavenly hosts to cry out HOLY, HOLY, HOLY, and now this robe of mockery was put upon you?      Jesus how was it that you didn’t respond with wrath.  You could have rightfully fought for yourself.  If there was ever a man who could have justified himself it would have been you.  It would have been perfectly just for you not only to rebuke them, but to also kill them with the breath of your mouth.

I wonder if you were thinking about your cousin John at this point? I can’t help but wonder what it was like for you to stand and have the man who killed your cousin in cold blood now mock and revile you? I can’t fathom that you had no bitterness of heart towards Him? I can't fathom what its like to be totally without sin in the face of such depravity.  Right now, I call to mind when you called this Herod a fox... Oh how I love that you called him a fox.

To the common person this treating with contempt was probably all to common, but it usually would be followed with some severe punishment.  Maybe Herod said in his heart.  “ I could condemn this man, but I will show Him mercy and only mock him.”  It is scary that their normal impulsive actions caught them in the most inopportune time.  Obviously, this was an action of Herod that he frequented; one of putting others down in his own insecurity to bolster himself.  A insecure ruler with an unruly tongue is the worst kind.

However, the reality is that there is a sense of reverence in this scene in the midst of the horror of mockery.  Jesus the fact that Herod has absolutely nothing to condemn You for screams of your perfect innocence.  You are found blameless even before this wicked ruler.  Though his dullness doesn't perceive the magnitude of who stands before Him He still knows deep down that you are totally guilt free a feeling he himself has never known.

Now to understand this scene we must understand that after the death of Herod the Great (Herod Antipas' father) the Romans divided up the authority of Herod’s pseudo kingdom (Herod was just a puppet of Rome).  The Roman’s gave Galillee to Herod’s son Herod Antipas (the Herod from our story), But Herod’s other son Herod Archelaus was deemed unfit to rule Judea (which included Jerusalem), and so they brought in another Roman to govern that area.  Pilate ended up as the successor and governor of  Judea and was actually living in the magnificent Palace that Herod the Great had once built and lived it.  It was also probably the palace that Herod Antipas grew up in as a small child.  Herod Antipas was living in a much smaller fortress surely having pinned up anger against Pilate for dwelling in his fathers great palace and ruling Judea like his father once did. Herod Antipas probably thought of himself as the rightful person to live in His fathers palace.  This most likely was why Herod and Pilate were at odds with one another.  Now picking back up in our story Herod sends Jesus back his long time rival Pilate.  How mortifying is it that Herod and Pilate reconcile their differences and build a new found relationship upon the common grounds of mockery towards the Son of God.  I mean what could their relationship possibly been built on otherwise?

Jesus now looking at the last scene from this passage I think of the horror of the roman guards walking you through the streets on your way back to pilate wearing that mockery of a robe.  Jesus you passed by the crowds who all saw you being scornfully treated.  But You remain silent, totally submitted to the Father, holding your peace once again, knowing this is your cup of suffering You must drink.

Jesus I can’t wait for the day when you will be vindicated these streets of the great city of Jerusalem.  The city that has killed all the prophets and who killed You will at last receive You.  That city that mockingly escorted you down the streets in shame will one day bow the knee in universal adoration to You as both Lord and Christ.  The ones who once mocked you will one day stand face to face and be forced to look your blazing eyes of fire.  On that day the Lord alone will be exalted and all that scorned you and treated you with contempt will be thrown into the blazing furnace where worm does not die and fire does not go out.
gospel meditations